Sportswriter Al Grady continues in his article on George Boller:

“Boller’s father became seriously ill in 1940, so George had to leave school temporarily and it turned out to be permanent when World War II erupted not much later (Pearl Harbor-December 7, 1941). Boller went into the service in 1942 and missed that Iowa football season as well as the next three.”

“The service had its rewards, however, as it was there that he met his wife, the former Dixie Lee Boyer of Trenton, Missouri. A graduate of the University of Colorado, Dixie was teaching at a Japanese-American relocation center at Heart Mountain, Wyoming, and George was a military policeman there when they met.”

George and Dixie took a quick three-day leave from Heart Mountain and were married at 4:35 pm in a Presbyterian parsonage on St. Patrick’s day, March 17, 1945, in Billings, Montana.

In her wedding book, Dixie writes:

“the bride wore a brown gabardine suit with matching accessories and a beautiful gardenia corsage. Rev. A.G. Adams performed the double-ring ceremony in a mid-Victorian parlor. The tension of such a beautiful but critical moment caused us to review our vows later, because it was impossible to grasp them fully during the wedding. It was the most wonderful moment in our lives and may we never forget our promises of love.”

In reference to their honeymoon, Dixie writes:

“In wartime, brides have short or no honeymoons. We were no exceptions. Following the ceremony, we and our attendants (Sergeant and Mrs. Carl B. Reuscher) had a lovely dinner at Billings Bel-Nap Hotel. We re-saw the musical comedy, ‘Naughty Marietta’. It was an odd but lovely sounding name, this new Mrs. G. E. Boller. Attended the Presbyterian Church Sunday morning, had a luxurious lunch with just us two. Monday, after sweeping our rice and carton-decorated apt., we shopped in Cody (Wyoming) and spent the rest of our 3-day pass at home in 18-B, Heart Mt.”

“We were home exactly 8 minutes when Mr. & Mrs. Fayette Burton, Bonnie Braska, Larna Hill (Wyrough) and the Burton children dropped in. A bride’s first venture in entertaining! After the review of 18-B, we munched peanut salad and toasted cheese sandwiches, olives, and coffee. I hope they enjoyed half my thrill in seeing my new trays and coffee server in action.”

In a sidebar here, I need to explain to many of you about the “Japanese-American relocation center” where George and Dixie first met. During the early days of World War II, immediately following Pearl Harbor (December 7, 1941) the United States government was very concerned about possible Japanese air strikes on the west coast of America. In order to “protect” the country from possible sabotage, a great injustice occurred in the early 1940’s. Nearly every American citizen with a Japanese heritage who was living on or near the west coast was ordered to surrender all their homes, businesses and belongings and be relocated to several make-shift internment camps set up in the western mountain states of the U.S.

One such location was Heart Mountain, Wyoming, named for the heart-shaped mountain peak located in the plains of Wyoming directly east of Yellowstone National Park. Where once there was nothing but flat land and brush, quonset-huts and barracks quickly sprang up that eventually comprised during the war years (1942-1945), the third largest city in Wyoming. Thousands of Japanese-American families flooded into Heart Mountain, setting up their “temporary” homes for the duration of the war. The U.S. government brought in soldiers, like my father, to “protect” and administer over this growing community. My father occasionally laughed about how he was called to be a military policeman, since only a few hundred were assigned to Heart Mountain to oversee literally thousands of Japanese-Americans. He joked that there was very little he could have done if the people decided they no longer wanted to live in such a “hell-hole.” In a letter he wrote in 1994, George described his experience this way, “It was a shock to me. There were tar-papered covered barracks, central dining areas, and latrines.”

In an effort to make this atrocity in American history more palatable to the public, other American citizens were brought in to make the community more livable. One such person was my mother, Dixie Lee Boyer, who after graduating from the University of Colorado in the spring of 1943, was offered a teaching job that paid $2,400 (plus room and board) per year, working with hundreds of young Japanese-American children. My father who was earlier stationed at Jefferson Barracks, near St. Louis, Missouri, was transferred to Heart Mountain in September, 1944. It was in this environment where my mother and father first met. As the story goes, my mother (Dixie) “knew” that very first moment she laid eyes on that handsome young soldier (George) in the PX (the army recreational center located on base) that she was going to become “Mrs. Boller!”

Some of our most enjoyable records are the series of “love letters” we have between George and Dixie as they were preparing for their marriage. It seems that George had returned to Wayland on a two-week furlough just about a month prior to their marriage in March of 1945. One letter typed to Dixie (Darling) on George’s Corona typewriter on Valentine’s Day eve states:

“I’ll probably go to Washington (Iowa) Saturday and get the ring. I picked it out Friday and they were getting it mounted for me. Do you know that you wear a size 4 1/2? Gosh, baby, you have a small dainty hand…It’s nice to be home, darling, but honestly, bunny duck, I miss you so-o-o much. I can hardly wait to put that lil‘ ole diamond on your third-left. Gosh, I’m going to be proud of that!… Write again, real soon, honey, and we’ll soon be seeing each other again. The days are flying by, and it’s less than a week before I’ll be boarding the Zephyr, westbound.”

CLICK HERE to read all the letters & get more details! 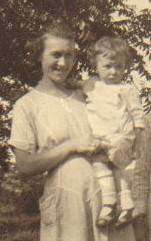 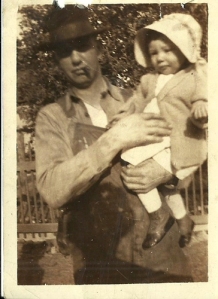 A young Dixie Lee growing up in Trenton, Mo.

Dixie Lee Boyer was born a New Year’s baby on January 1, 1923 to William Hollis (Hollie) and Edith Mae (Edie) Boyer in Trenton, Missouri. Located about 80 miles northeast of Kansas City, Trenton was a thriving train-switching hub community during the heyday of the railroads. William Hollis was a hard-working railroad man, laboring for the Rock Island Railroad for most of his adult years (1898-1951). Click here for more about the Rock Island railroad and Trenton, Missouri. 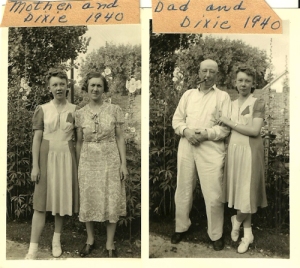 I recall stories of Hollie as a young man serving as a fireman (the man who shoveled coal into the massive locomotives) on long cross-country trips for the Rock Island Railroad.

One day on the plains of western Kansas or eastern Colorado, the locomotive my grandfather was working on suddenly collided with another on-coming train! The huge boiler that provided the steam for the engine, instantly exploded sending the train engineer and my grandfather flying from the cab. The engineer was killed and my grandfather said that rescue workers found him unconscious, hundreds of feet from the accident scene: “naked as a jaybird”. The explosion had been so strong, it literally blew his clothes off him! After that close call, William Hollis decided to play it a bit safer, asking for only the shorter runs from Trenton to Kansas City or Des Moines. He retired from the Rock Island railroad (1951) and died on June 29, 1957. Edie lived on for another 31 years as a widow, dying May 8, 1988. Both are buried in Trenton, Missouri.

Like George, Dixie was the only child in her family. Dixie grew up to be a beautiful young woman. She graduated from Trenton High School and Trenton Jr. College and then attended the University of Colorado in Boulder, Colorado, receiving a Bachelor Degree in Education in 1943. Dixie’s aunt and uncle, Jay & Hazel Wilson (Edie’s sister) lived in nearby Denver, Co and were great family friends for many, many years. Once married to George, this union of two “only children” made for an interesting family where no first cousins existed for my brother or me!

By 1946, WWII had ended and now it was time for a whole new generation of young Americans (who had literally saved the world!) to come back home and begin a normal life again…in this new era of American history we now call the Baby Boomer generation!